When should you use GPU power in 3D production?

In the world of computer graphics, over the past few years, new technologies have been increasingly developed. Thanks to GPU computing, complex graphics-related workloads such as processing 4K high-end movies, or simulating 3D graphic blocks have been solving and expanding new horizons in 3D production. GPU plays an important role in processing AI, big data or other GPU intensive tasks.

GPU stands for Graphics Processing Unit, as opposed to CPU (Central Processing Unit), so that probably already gives you an indication of what it does. It is a processor dedicated solely to graphics processing operations or heavy calculations. One of the main functions of the GPU is to lighten the load on the CPU (Central Processing Unit), especially when running graphics intensive applications like hi-res games or 3D graphics apps. A GPU’s architecture does not differ too much from a CPU, however, its construction is much more optimized towards the efficient calculation of graphical information. Below are 4 situations in 3D production where GPU power prove its outstanding strengths.

Simulation work takes lots of computing, in my point of view the first priority goes to Number of CUDA cores or processing cores, next the processing power of the GPU, that is in the GFLOPS (for single and double precision floating point numbers). GFLOPS is related to number of cores.

Next is the memory system (size and bandwidth).More memory means more capability of storing more data/info of the particles to be simulated, more memory bandwidth means faster transaction of the data between CPU-GPU or GPU-memory.

Up to this point, the GPU was primarily a coprocessor to boost graphics performance—a piece of special hardware that made your explosions more spectacular in PC games. From this point on, the GPU would take on more and more of the type of computing usually done by the CPU. NVIDIA’s compute unified device architecture (CUDA) programming language for GPU computing also laid the foundation for the transition. That opened the door to GPU-accelerated simulation, which harvests the GPU’s superior number of processing cores to tackle massively large simulation problems.

Real-time computer graphics or real-time rendering refer to anything from rendering an application’s graphical user interface (GUI) to real-time image analysis, but is most often used in reference to interactive 3D computer graphics, typically using a graphics processing unit (GPU). One example of this concept is a video game that rapidly renders changing 3D environments to produce an illusion of motion.

As GPU render engines become more popular and feature rich, you may be thinking (for the purposes of final frame rendering) that it’s time to jump in and integrate GPUs into your workflow. The driving force behind a migration to GPU rendering has always been speed.

In fact, people frequently ask “How much faster is GPU rendering as compared to CPU rendering?” This is a tricky question to answer because of the many variables involved. To compare the CPU to the GPU, I simply note how long the GPU engine took to match the baseline image quality. In the example, the baseline image quality that was rendered on the CPU took 19 minutes and 11 seconds, while the GPU took 3 minutes and 4 seconds to match the baseline.

While CPU rendering is both accurate and reliable, it is very slow compared to what is possible these days with GPU rendering.

To give you a practical example, a couple of months ago I used Blender to make the animation that’s being worked on in the screenshot below this section (not exactly a complex scene). It’s an 11-second, 1080p, 60-FPS animated intro for my YouTube videos. Rendering the 660 frames of that animation via CPU rendering took over 20 hours (with an i5-6600K). Rendering those same 660 frames via GPU rendering took under 4 hours (with an i5-6600K and a GTX 1060 6GB).

Sequential operations are the CPU’s easy victory, but in the realm of outputting rendered images via parallelized rendering, the GPU is in its element. The CPU is still an important player regardless, but prioritizing the GPU when you’re budgeting can make a lot of sense. 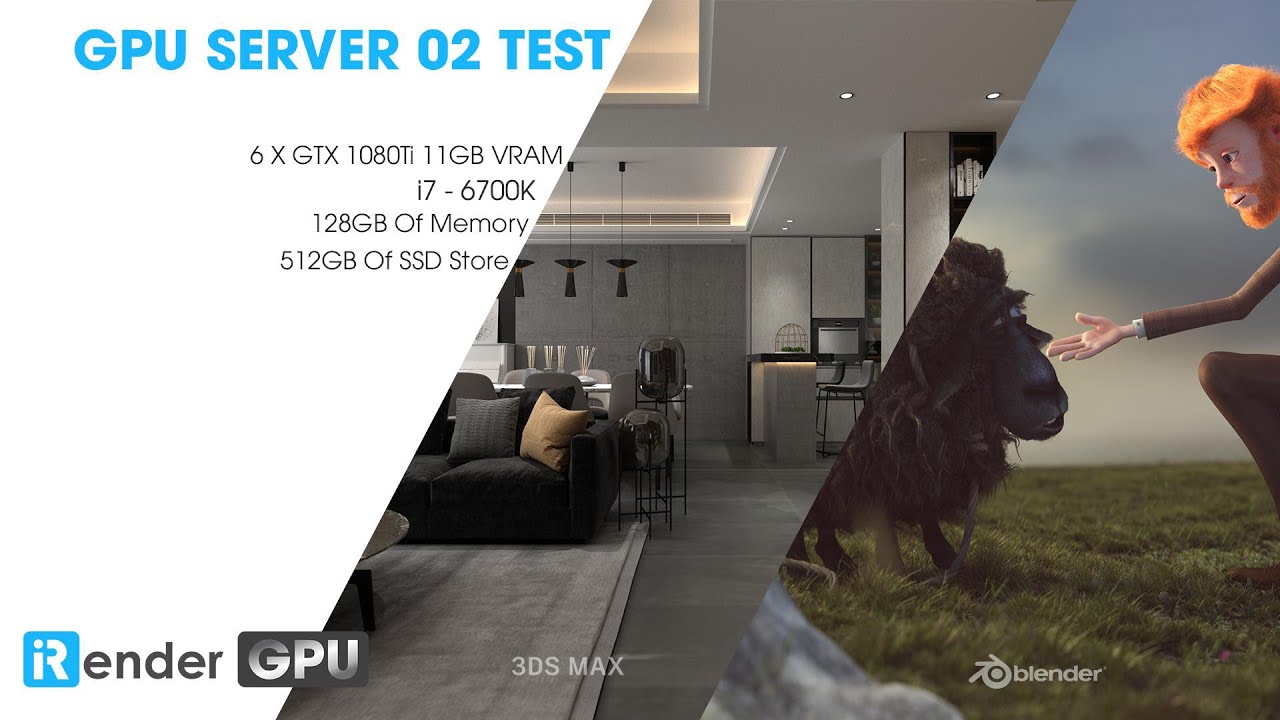 GPU rendering makes it possible to use your graphics card for rendering, instead of the CPU. This can speed up rendering because modern GPUs are designed to do quite a lot of number crunching. On the other hand, they also have some limitations in rendering complex scenes, due to more limited memory, and issues with interactivity when using the same graphics card for display and rendering.

Let’s calculate the costs of owning and running your own GPU server instead or renting it from us and with per- minutes payment.

You are looking to buy 6x GTX 1080 server, it will cost you $500 per card plus another $600 for cheapest peripherals, total of $3600. It does not include electricity and maintenance costs. If you add it up you’ll see that renting GPU server from us is the most beneficial way to save you time and money. Don’t worry if you can’t afford to invest in a whole new graphics card, iRender has created an alternative that is both cheap and powerful, a GPU rental service that goes by the name of GPURental.net, at your disposal for GPU 3d rendering, processing Big Data, or any task that can benefit from parallel processing.  We are keeping our costs as low as possible so you can benefit from the best prices on GPU dedicated servers because we utilize one of world’s cheapest electricity, times less expensive than in highly populated regions. This factor is sustainable in the long term, which permits IRender to preserve a fixed competitive price.

See our price here or contact us for more information!